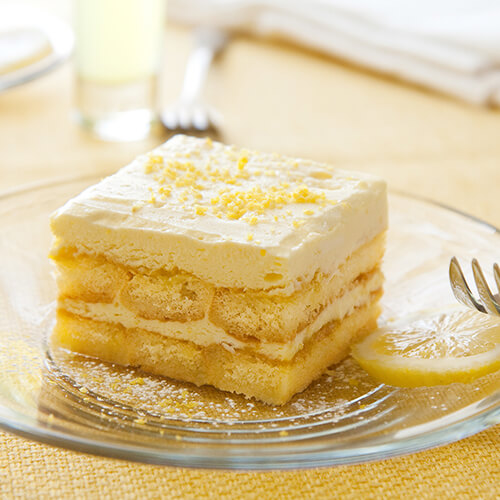 Recipe courtesy of Chef Marco Pilloni, Cheney Brothers
5 lemons
5 eggs
1 cup sugar
1 ½ cups of Lina’s Crema di Limoncello
1 cup water
1 pound of mascarpone (room temp)
40 or more lady fingers
Start by zesting two lemons and juice all five lemons. Separate the juice and zest into bowls. Start a double boiler, separate eggs yolks and egg whites. Beat the egg yolks with a ¼ cup of sugar and ½ cup Lina’s. Whip until yolks form a ribbon on the surface. Set aside and let cool to room temp. Meanwhile in a sauce pan pour the remaining 1 cup of Lina’s, all of the lemon juice, 1 cup of water and ½ cup sugar and bring to a simmer (Lina’s Syrup), set aside and cool in the fridge. In a stainless bowl whip mascarpone and lemon zest until light and creamy. In a mixer beat the egg whites with a ¼ cup of sugar until stiff peaks form. Fold in the egg yolk mixture into the mascarpone in two parts, add in the eggs whites small parts at a time until fully blended.

Start by lightly dipping lady fingers into Lina’s syrup, layer on bottom of a 9” x 13” glass pan, then add a layer of cream mixture and repeat until satisfied or all ingredients are gone. End with cream mixture on top, garnish with additional lemon zest.